The Annual Installation of the new RWM and his office bearers was held in the Volunteer Hall, attended by a large deputation, led by the Provincial Grand Master, Bro. John W. Blackie of the Provincial Grand Lodge of Roxburgh Peebles and Selkirkshires, along with a large gathering of brethren from various lodges, Bro. Gordon J. Newlands was installed as the new Right Worshipful Master of the Galashiels Lodge.  Installing Masters for the ceremony were Past Masters, Bro. George Duff and Bro. Andrew Beatt. 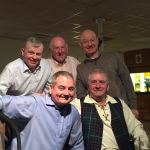 Another fantastic night was held in the Royal British Legion, with great speakers, great food and great fun had by all.  What is fast becoming a great regular night on our calendar, we were joined by many Legion members who all had a tremendous night’s entertainment. 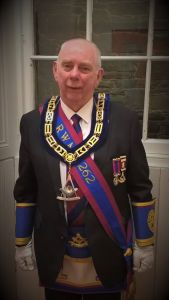 Brother Jock Clowry was installed into the Chair of King Solomon in what was an extremely enjoyable afternoon and evening, held in the Galashiels branch of The Royal British Legion.  Installed by Past Masters – George Duff and Andrew Beatt, a fine deputation from the Provincial Grand Lodge of Roxburgh, Peebles and Selkirk Shires attended along with many brethren from within and outwith the Province. 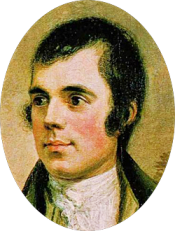 We were delighted to host a Scottish Night on the 11th of February 2017, held in the Royal British Legion, Galashiels.  A three course traditional Burns Supper fayre was enjoyed, along with a little bit of Burns, and some traditional Scottish music.

In excess of 120 Brethren stayed after the meeting in the Volunteer Hall, and enjoyed an excellent meal with some first class speakers,  followed on by an excellent night of harmony. April 2016 Meeting. The Galashiels Lodge No. 262 were delighted to welcome a deputation from the Provincial Grand Lodge of Roxburgh, Peebles and Selkirk Shires, headed on this occasion by The Right Worshipful Provincial Grand Master, Bro. John Walter Blackie. The Right Worshipful Master Bro. Duff was delighted to present Bro. Blackie with a commemorative jewel to mark the 200th anniversary of the Galashiels Lodge being granted it’s charter.

We then enjoyed a well researched,  first-class lecture on the early history of the Galashiels Lodge, presented by Bro. Alex Fotheringham P.M.

We were delighted to install Bro. George A. Duff as the new Right Worshipful Master of Galashiels 262.  Bro. Duff has been Master of 262 on two previous occasions and is also a Past Master of Haughfoot 1824.  An excellent installation took place, with Installing Masters Drew Laven and Jim Pryde performing an excellent ceremony. 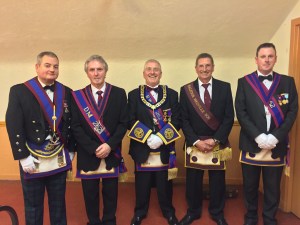